Originally published in the February 2015 NARP Newsletter, available to members.

A national survey of state rail plans and grant applications undertaken by NARP documents an enormous unmet demand for intercity passenger rail investment that is growing with each passing year. By analysing and collating rail projects put forth by state rail divisions, rail authorities, and Amtrak, NARP calculated an existing pipeline of rail projects totaling $208.57 billion. If Congress were to step up and provide predictable and dedicated funding for passenger trains, state DOTs have shown they are ready to launch work that would dramatically revolutionize the way Americans travel.

This is a living document that NARP will update periodically as existing projects are completed and new corridor development plans supplant old studies. Some of these projects represent competing visions for the development of the U.S. rail network—incremental upgrades to existing service versus cutting edge rail technology. In collecting these numbers, NARP has taken pains not to filter out any projects—if a state went through the process of submitting a grant application to the Federal Railroad Administration or included a project in its state rail plan, it has been included. This list also omits some critical projects—such as the Gulf Coast rail restoration—because no concrete dollar figure has been identified. We have also included links to project documentation where available (online version only).

While the map depicts all 274 projects identified, given the sheer numbers we can only present descriptions for select projects. NARP’s Committee on Legislation—made up of volunteers from across the country, elected by NARP members—have identified what they believe to be the most critical projects by region. 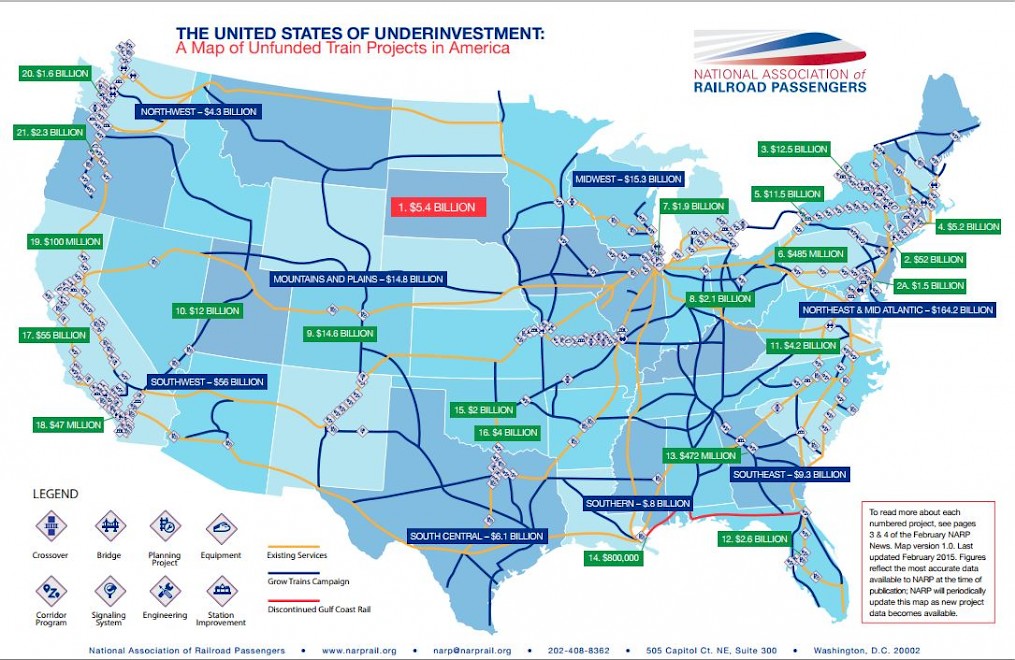 1.) New Equipment - $5,400 million: It is absolutely critical to immediately provide funds for the acquisition of new equipment and the repair and refurbishment of Amtrak’s rapidly aging fleet. NEC and National System trains utilize a fleet that is too small to meet current needs. Reliability and safety of outdated equipment is also a concern. This item doesn’t correlate to a specific grant; NARP extrapolated the figure based upon ridership needs and Amtrak’s most recent fleet plan.

2.) Northeast Corridor State of Good Repair - $52,000 million: As part of a collaboration with the 12 NEC states, the FRA, eight commuter railroads, and three freight railroads, Amtrak produced a plan outlining the min- imum level of investment to cover needed system repair and upgrades, along with some capacity enhancements to help handle the projected 60% increase in today’s intercity and commuter trips on the NEC by 2030.

2a.) Baltimore & Pennsylvania Tunnel - $1,500 million: Amtrak has been warning of the need to replace this tunnel—constructed in 1873—which acts as a critical chokepoint on the NEC, forcing trains to slow to 30 mph. One-fifth of Amtrak trips and one-third of its ticket revenues depend on travel through Baltimore. The tunnel is also critical to MARC commuter trains, along with local freight rail operations.

4.) NEC High-Speed Replacement Trainsets – $5,200 million: Amtrak applied Amtrak’s goal is to acquire trainsets that can operate at 160 mph with options for 186 mph and 220 mph NextGen high-speed rail service on new infrastructure between New York and Washington. Amtrak is seeking up to 28 trainsets with between 400 and 450 seats that can meet or exceed current Acela Express trip times on the existing NEC infrastructure. The initial order of new trainsets is expected to enter revenue service on the NEC in 2019.

7.) Cross Rail - $1,925 million: CrossRail Chicago is a program of projects developed by Midwest High Speed Rail Association designed to build a passenger-dedicated mainline into and through Chicago. Each of the projects has already been proposed independently by several agencies. If coordinated, each becomes more powerful. The projects include: Union Station capacity improvements, new connections at 16th St/St. Charles Air Line, the A-2 Flyover, an O’Hare Terminal, Metra/Milw Rd Track improvements, and Metra/IC electric division track improvements.

8.) Chicago to Cleveland High Speed Rail Corridor - $2,186 million: Indiana applied for a corridor development grant to build a modern, high-speed rail network that would make it possible to travel from Cleveland to Chicago within 2.5 hours.

9.) Front Range Rail - $14,600 million (Corridor Construction): The Colorado Department of Transportation has developed a plan to build a modern rail service on a north-south corridor between Fort Collins and Pueblo and on an I-70 east-west corridor from DIA to the Eagle County Regional Airport. The system would improve mobility for the region’s congested transportation system, and create 11,000 jobs directly, with another 16,000 indirect “spin-off” jobs.

10.) Western High Speed Rail Alliance Service Planning – $12 million (Planning Grant): Formed by regional governments in Colorado, Utah, Arizona, and Nevada, the WHSRA applied for a planning grant to develop a high-speed rail network throughout the Rocky Mountain and Intermountain West regions, with eventual possible connections to the Pacific Coast and other areas of the U.S. Major metropolitan areas connected by the proposed network include Denver, Salt Lake City, Reno, Las Vegas, and Phoenix.

12.) Florida High-Speed Rail (Tampa-Orlando) - $2,654 million: The Florida Department of Transportation was initially successful in securing a grant for the devel- opment of 220 mph high-speed train service between Tampa and Orlando, until Governor Rick Scott killed the project for political reasons. However, with All Aboard Florida’s plan to connect Miami to Orlando with 110 mph service, a Tampa to Orlando service still has massive potential to contribute to the state’s mobility and economy.

14.) New Orleans - Houston Corridor Plan - $800,000: The Southern Rapid Rail Commission applied for a planning grant to develop service along the 362-mile track segment between New Orleans and Houston. The corridor includes the communities of Baton Rouge, Louisiana; Lafayette, Louisiana; Lake Charles, Louisiana; and Beaumont, Texas. The total population of communities being considered for proposed high-speed rail stations along this segment was 8,579,531 in 2010. Proposed high-speed intercity passenger rail service on this segment is based on incremental improvements to existing freight railroad right-of-way (primarily owned by either Union Pacific or Kansas City Southern).

15.) South Central High-Speed Rail Corridor (Tulsa - Ft. Worth) - $2,096 million: The Oklahoma Department of Transportation applied for a grant to develop the 311 mile rail corridor between Fort Worth and Oklahoma City.

16.) Texas – Oklahoma High-Speed Rail Corridor – $4,000 million (approximate): The Departments of Transportation for the states of Oklahoma and Texas are currently engaged in an evaluation of a range of passenger rail service options along the 850-mile corridor from Oklahoma City to South Texas. The corridor will help the state accommodate booming population and economic growth along the I-35 corridor, serving Oklahoma City, Dallas/Forth Worth, San Antonio, and Austin, with the potential to extend south to Mexico. The study’s results will be made public by the end of 2015.

17.) California High Speed Rail System (San Francisco - Los Angeles) - $55,000 million (approximate): The California High-Speed Rail Authority has finalized a $68 billion plan to construct a statewide high-speed rail system connecting Southern California to the Bay Area, via the Central Valley. The project has received roughly $4 billion in federal funding, in addition to $9 billion in voter approved bonds. The project also has a dedicated stream of funding from the state’s polluters tax, with revenue estimated $250 million per year.

18.) Los Angeles - San Diego Corridor Development - $47 million: Also known as Amtrak’s Pacific Surfliner Corridor, more than 2.7 million intercity passengers use the 351-mile LOSSAN corridor each year. During the next 20 years, more than $1 billion in improvements are planned in the San Diego County section of the LOSSAN corridor. These projects include double tracking, bridge and track replacement, new stations, grade separations, and other improvements to shorten trip times and increase passenger rail service.

20.) Pacific Northwest Corridor (Seattle – Portland) – $1,685 million: The Washington State Department of Transportation applied for a grant to develop long-term system expansion and realization of service benefits, including the future addition of a dedicated high-speed rail track with train speeds of up to 150 mph. Benefits include additional round trips, reduced travel time, and increased on-time performance.

21.) Pacific Northwest Corridor (Portland – Eugene) – $2,348 million: The Oregon Department of Transportation applied for a grant to upgrade passenger train service along the Willamette Valley, expected to see population growth of 35 percent over the next 20 years, reaching 3.6 million by 2035. During the same period, freight volume is expected to grow by 60 percent. The application identified rail improvements to provide additional passenger and freight rail capacity, and to provide more reliable trains, more frequent trains and shorter travel times between Eugene and Portland. ODOT is currently studying alternatives as part of the EIS process.