NARP is asking its members—and all rail and transit passengers everywhere—to hit back against this reckless proposal by writing their Senators and Representatives today!

“Unfortunately, it appears that President Trump has abandoned his campaign promise to invest in our infrastructure and get Americans working again,” said NARP President & CEO Jim Mathews. “This is a budget that treats small towns and rural communities as ‘flyover country.’ Instead of seeing citizens, it sees ‘a poor business case for investment.’ But we know that every American town deserves the tools to succeed, and the small business owner waiting at a station in Mississippi is no less important than a banker boarding an Acela in New York.”

“Having just seen members of Congress thoroughly reject these cuts in the FY2017 budget in April, we’re disappointed to have to fight this same battle so soon,” said NARP Chair Peter LeCody. “But we also know it’s a fight we can win. We need every single American who relies on transit and passenger rail to get off the sideline today, and let their elected officials know our country needs a modern, safe and efficient transportation network for the 21st Century. If we lend our support to stiffen their spines, Congress will invest in a better future.”

After an initial reading of the Fiscal Year 2018 budget, NARP has identified the following threats to rail and transit:

Realistically, however, the proposal would likely shut down the entire National Network, state-supported trains and all. After years of stagnant funding, aging equipment and stations, and increased ridership demands, Amtrak is already running the national rail system on a threadbare budget. Gutting half of the National Network funding will likely result in a slow-motion collapse of the entire network.

—Flatlines funding for Amtrak’s Northeast Corridor at $235 million, $280 million below FAST Act authorized levels. With tens of billions in critical capital investment needed urgently on the Northeast Corridor, stagnant funding levels will shut the door on a number of urgent projects to improve reliability on the corridor.

—Slashes $499 million from the TIGER grant program, zeroing out the highly successful program that invests in passenger rail and transit projects of national significance;

—Even the oft-touted infrastructure investment package falls short. Not only will the investment be spread out over 10 years, the $200 billion in proposed infrastructure spending (not the $1 trillion promised in the campaign) is secured through an accounting gimmick, and will be offset by $95 billion in assumed Highway Trust Fund cuts after 2020.

About the National Association of Railroad Passengers

NARP is the only national organization speaking for the nearly 40 million users of passenger trains and rail transit. We have worked since 1967 to expand the quality and quantity of passenger rail in the U.S. Our mission is to work towards a modern, customer-focused national passenger train network that provides a travel choice Americans want. Our work is supported by more than 28,000 individual members nationwide. 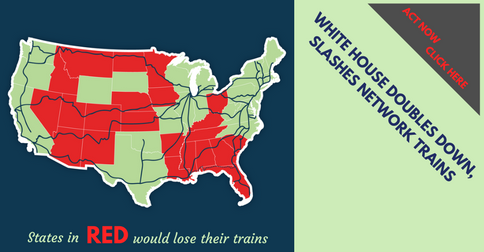