What’s in the Investment in Infrastructure and Jobs Act (IIJA)?

Rail Passengers has provided a breakdown of the Investment in Infrastructure and Jobs Act (IIJA)’s passenger rail highlights, looking at both funding and policy reforms.

What's exactly in the bill? See all the fact & figures below. 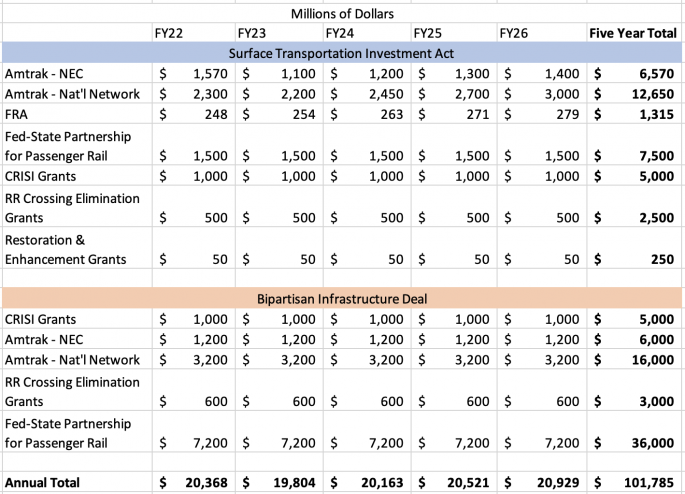 Requires the USDOT to provide Congress a detailed plan to spend the first year’s money within 180 days of enactment, and each year thereafter as part of the USDOT’s annual budget submission.

Requires the USDOT to provide Congress a detailed plan to spend the first year’s money within 180 days of enactment, and each year thereafter as part of the USDOT’s annual budget submission.

Federal-State Partnership for Intercity Passenger Rail Grants - $36 billion: Not more than $24 billion shall go to projects on the NEC.

Sec. 22201. Amtrak Findings, Mission, and Goals: Amends Amtrak’s mission and goals to emphasize its role in providing service to rural communities, recognize the importance of long-distance routes, and encourage Amtrak to maximize the benefits of Federal investment (as opposed to minimizing costs).

Sec. 22204. Increasing Oversight of Changes to Amtrak Long-Distance Routes and Other Intercity Services: Requires Amtrak to include information regarding any change or plans to change a route, frequency of service, or station stops in its annual operations report and its general and legislative annual report to Congress.

Sec. 22206. Improved Oversight of Amtrak Spending: Requires Amtrak to provide a much greater level of detail on its spending in annual reports to Congress, including:

Sec. 22208. Passenger Experience Enhancement: Eliminates requirement that food and beverage services on trains may only be provided if their revenues break even during a fiscal year. This section also directs Amtrak to establish a working group—including nonprofit organizations representing Amtrak passengers—to develop recommendations to improve Amtrak’s onboard food and beverage services.

Sec. 22210. Protecting Amtrak Routes through Rural Communities: Prohibits Amtrak from discontinuing, reducing the frequency of, suspending, or substantially altering the route on any segment of any long-distance route if Amtrak receives adequate funding for that route.

Sec. 22212. Enhancing Cross Border Service: Requires Amtrak to report to Congress on how to improve Amtrak passenger rail service between the United States and Canada, identifying challenges such as delays associated with customs and immigration inspections.

Sec. 22306. Interstate Rail Compacts: Establishes a competitive grant program to provide Federal funding for interstate rail compacts—analogous to the Southern Rail Commission which has led the Gulf Coast Restoration project. Grants will cover costs of administration, systems planning, and operations coordination. Grants to IRCs will not exceed $1 million annually and require a local funding match of at least 50 percent.

This section would also allow FRA to engage in multi-year funding agreements.