May was a bad month for late trains, with Amtrak reporting that passengers on nine out of 14 long-distance trains suffered even more delay minutes than the previous 12-month average.

This morning we got our copy of the monthly preliminary Host Railroad report and started looking through it to compare May with the results posted last month in the First Quarter FY 22 report from the Federal Railroad Administration. The bottom line is it’s still pretty ugly out there, with – surprise! – freight train interference still taking the bulk of the blame for late trains.

The Silver Star deteriorated the most in May, with passengers experiencing 38 percent greater delay minutes than the Star had been averaging for the prior 12 months. The Sunset Limited came in with 28 percent more delay minutes, and the Auto Train was 18 percent worse.

Five trains, while still operating unacceptably late, managed to do better than their 12-month average: the Coast Starlight was 31 percent better than baseline, and actually came within 6.8 percent of meeting the new Federal 80 percent Customer On-Time Performance (OTP) standard. That made it the star performer of the 14 operating routes (the Meteor still isn’t running). The City of New Orleans got 28 percent better in May, with passengers experiencing fewer delay minutes than the prior 12 months. The Empire Builder, the Capitol Limited, and the Lake Shore Limited also notched improvements.

Even so, measuring by the overall Customer OTP standard not one single operating long-distance train made the grade, which was true for the entire first quarter of Fiscal 2022 as well. Customer OTP measures the percentage of all customers on an intercity passenger train who arrive at their destination no more than 15 minutes after the Amtrak-published arrival time. Delay Minutes measures the average number of minutes of delay on a particular route.

Three routes – the Southwest Chief, the Sunset Limited, and the California Zephyr – were an astonishing 66 percent below the Federal standard. The Chief in May posted only 13.2 percent Customer OTP, the Sunset notched 13.4 percent, and the Zephyr came in at 13.5 percent. 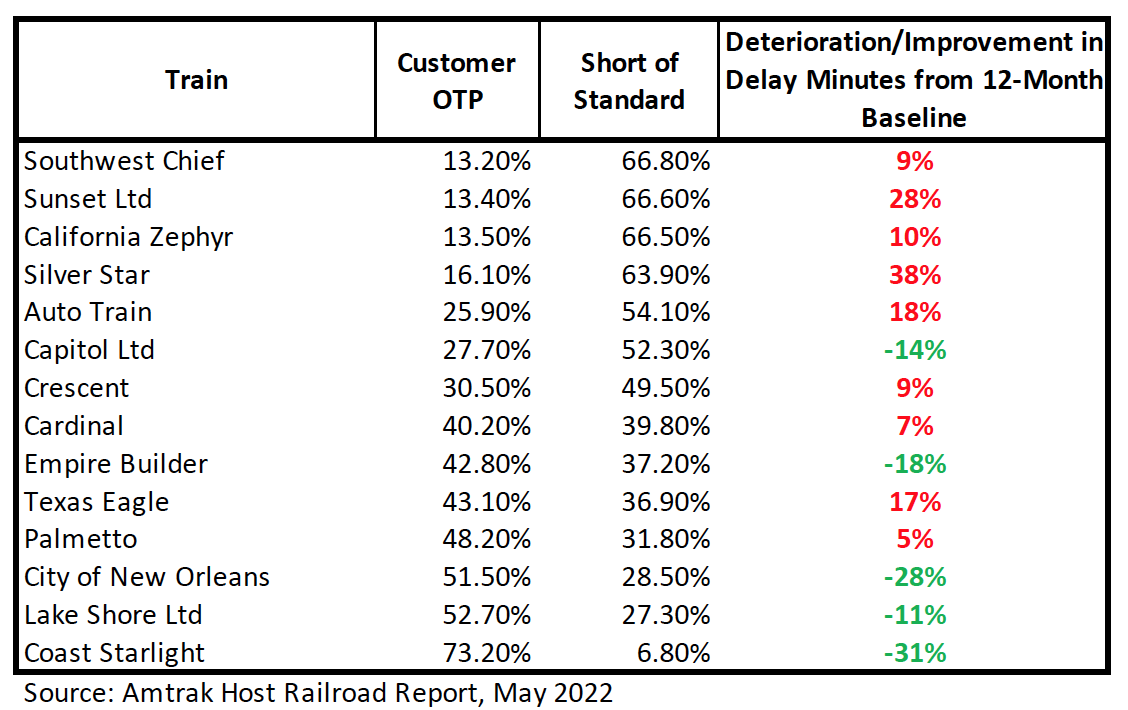