It's the 21st Century Somewhere

A Postcard from Dijon, France

In the United States, easy transportation is a promise of the future, perhaps a decade within our grasp. ‘Traffic will get better when the new highway cloverleaf is completed.’ ‘The Light Rail Line will ease traffic and loosen congestion.’ ‘Driverless cars will speed travel and eliminate traffic.’ A sort of ‘End of History’ solving the problem of personal mobility has been a decade away for more than 50 years, something that we have been continually promised.

The busiest travel weekend of the year happens to be an excellent [read: very affordable] time to travel abroad, as I opted to do over this past holiday. This escapist holiday ended up being an inspiring reminder that a version of this easy future of transportation can be found and sampled on the other end of a transatlantic flight, rather than through years of waiting and mere imagining. 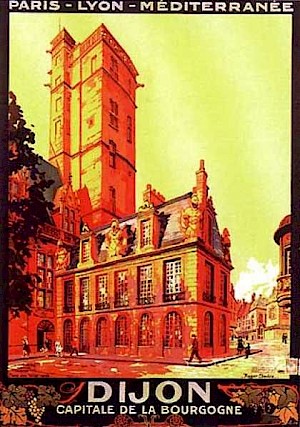 About 200 miles from Paris is Dijon, the capitol of France’s Burgundy region, known for its wines, sauces, and yes, mustard. It was as much a vacation away from traditional Thanksgiving foods as it was from our fractured transportation system. Dijon, like most major French cities, features high-speed railway station with multiple (15, in this case) trains direct to Paris every day.

Arrival at the Dijon train station introduces a fabulous tram system that we used throughout our stay there. It requires no real planning or thought to use, and generally defies everything that American streetcar systems seem to insist upon. 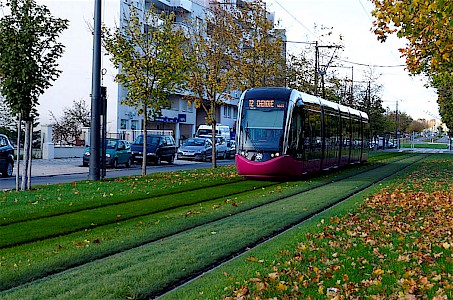 Systems like these in France have become backbones of their adjoining transit systems, quite unlike the small scale streetcar projects in the United States, that are more ‘economic development projects with transportation benefits.’ The few that are truly successful in both arenas of economic development AND transportation tend to follow one element or another from the French model, such as Kansas City, whose system is linear rather than circulatory.

There is so much to learn from French tramway [streetcar] policy, and it’s worthy of a deeper dive.

200mph #tgv, smooth and effortless from deep in the burgundy countryside. This train took us directly to the airport from hundreds of miles away in as much time as it took us to get home from the airport back in the states.

After a week in Dijon, we flew back to the United States via Charles De Gaulle airport in Paris. In the United States, if I were flying from an airport hundreds of miles away, I would no doubt plan to spend a night nearby. However, French transport policy wins again. There was a direct high speed train from Dijon to the airport, bypassing any stressful connections in Paris. It took little more than two hours to travel two hundred miles. There are few airports in the United States that offer intercity rail connections, and none as convenient, although there is an ongoing campaign for a similar station in Chicago.

#4 Such a pain to use, but so aesthetic that I can't help but look forward to flying out of it #saarinen

I must admit that the graceful main terminal at Dulles airport in Virginia holds a place in my heart, for its elegance and optimism. It still feels futuristic, even if it is very much of the 1960’s. Case in point: it took over two hours on transit to cover the 30 miles from Dulles back into Washington DC, the same time it took to cover over 200 miles from city to airport in France.

"The National Association of Railroad Passengers has done yeoman work over the years and in fact if it weren’t for NARP, I'd be surprised if Amtrak were still in possession of as a large a network as they have. So they've done good work, they're very good on the factual case."